Posted at 11:41h in Club Supercar - Events and corporate by Yvonne 0 Comments

Winner of Spanish Grandprix 2016 was Max Verstappen, an underdog of the lineup but clearly a well tuned strategic race for him. With the two giants out, Rosberg and Lewis Hamilton, it was anyone’s race to win, leaving the podium quite different than usual, which made for a nice change.

15th May 2016. The afternoon had started with an impressive lineup of 23 of the world’s fastest and most skillful drivers on the grid at the Spanish Grand-prix in Barcelona. The great thing about F1 racing is no matter how many times you watch a start it is always exciting with the cars revving, the engines turning over “10 to a dozen” as we would say in England. The start moves your internal emotions and pushes your adrenalin to a new level.

The Formula 1 fanatics are on edge and the big wig sponsors are watching the screens hoping their logo splashed upon these great race cars are shown “live” on TV. The guests in the paddock lounges are like sardines in a can as they all squeeze together at the balconies above the pit lane with their phone devices ready to film. 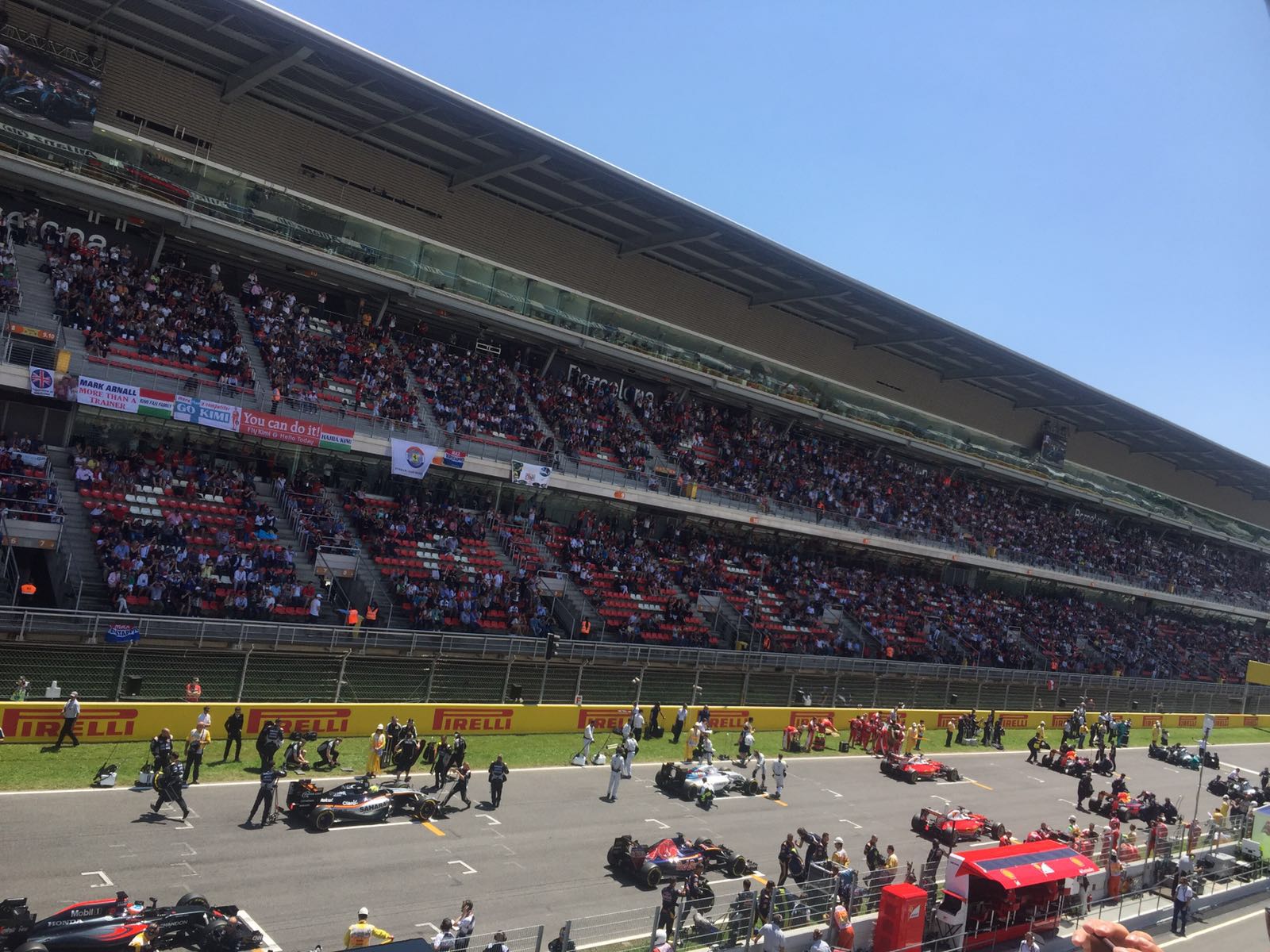 The smell of petrol and the rubber burning in the air, combined with the ear deafening sound of the engines becomes intense. I am dry in my mouth, almost able to feel the heartbeat of those around me as all eyes are on the green light and the famous Rolex digital track clock behind the count down. It is amazing how in the last 30 seconds before the light goes green how a quiet anticipation blankets the crowd, yet the race car engines running are loud and pulsating.
The sound was very special since the new sporting & technical regulations on engine rules kicked in early last year and again this year all F1 cars are slowly be adjusted to meet these rules, where items such as; cockpit safety, Exhaust layout – to improve engine noise, teams must now use separate exhaust pipes for the turbine and wastegate rather than the single exhaust used in 2015. The rules allow for the option of using a twinpipe for the wastegate, though any exit must not be more than 100mm from the main pipe. The Power unit allowance ,Power unit development, pit to car messages ,and a few more rules for 2016 are slowly being implemented thus creating a new beast of a F1 car.
Yet still , with all these changes it is as if the intense engine vibrations are running through your body like electric waves!
There is really, nothing else that sounds like a F1 car engine switched on.

The racing car is a beast of a machine,a single-seat, open cockpit with a semiautomatic sequential gearbox with 8 forward gears instead of 7, with 1 reverse gear, real wheel drive and nearly 1000 bhp these engines are the current crop of V6 turbo engines blasting through the 1000 horsepower barrier.
The 1000 horses barrier quoted by Fan zone from current news on grandprix.com “is a magical target in F1 and, according to many team sources, the current power units are already delivering more than 900bhp with some comfort.
They are now aiming to hit the 1000 bhp mark this season”, they say, therefore I say , it is no wonder we are in awe.

Even though, this years , Spanish GrandPrix started with rivals from the same team crashing at the start of the race, which was unusual and sadly unnecessary; however, this is a racing risk. I can’t help but assume the team manager was seriously pissed off! these cars and their parts cost a fortune and are limited for the season. 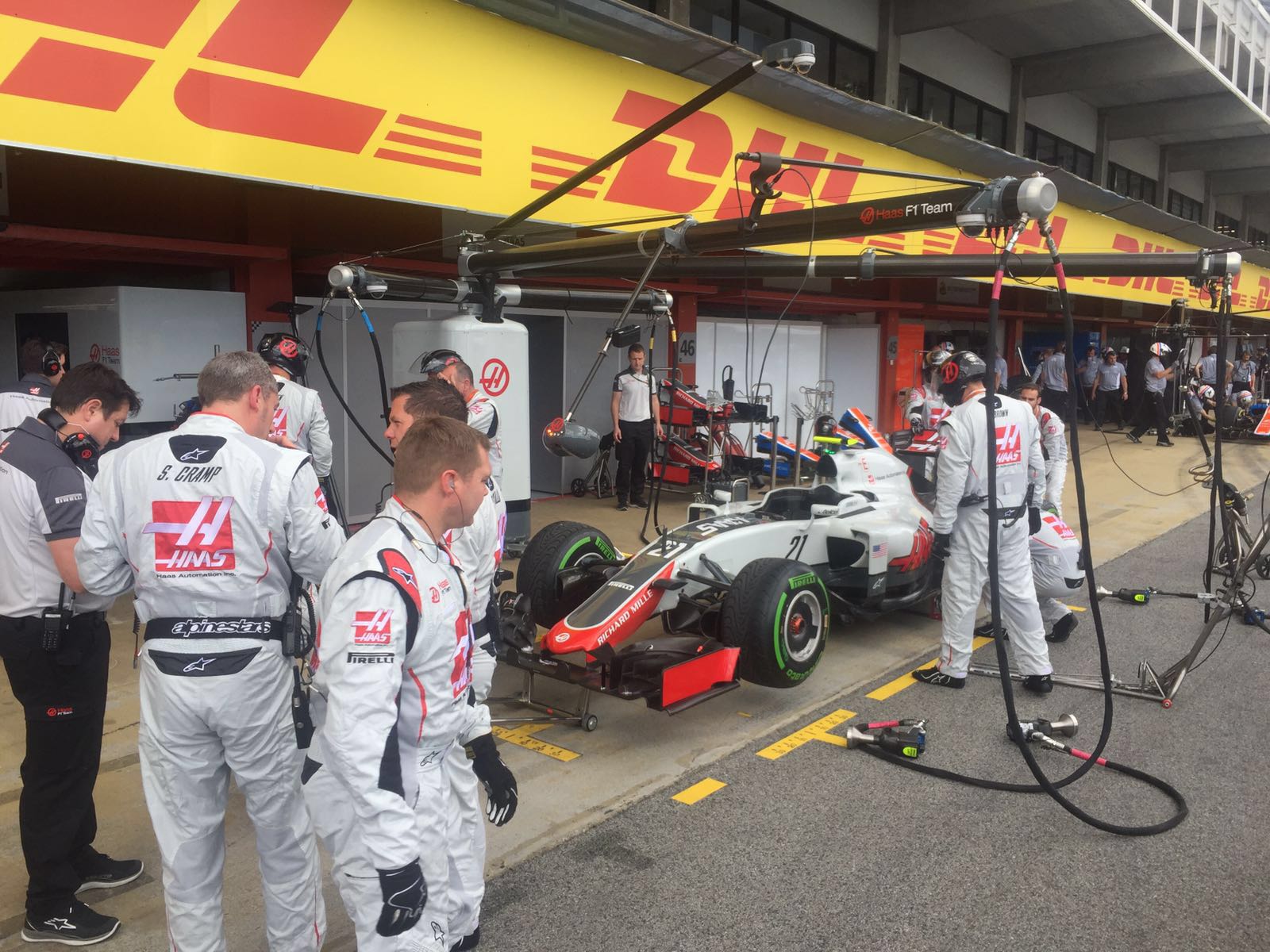 As I am British and raised in England, and though I have spent a large part of my adult life has been in Denmark, I tend to be a fan of different British sports personalities, and have since childhood. My Formula 1 hero was Nigel Mansell, racing from 1980 through to 1995, and coincidentally his last race was here at the Catalunya track at the Spanish Grandprix in 1995, therefore I have fond memories of this track and reminded to go down memory lane. I had two racing heroes back then, the deceased Ayrton Senna and of course Nigel Mansell. I also was had my eye on Alain Prost, a young aggressive French driver who now is an outstanding host, judge and trainer still widely seen at all Formula 1 races, Formula e races, 24hrs Le Mans and many more racing events that he remained involved in. My hero today is Lewis Hamilton though the Union Jack is neither here nor there, momentarily we hope … and of course Romain Grosjean driving for HAAS who Seier Capital continues to supports.

It is always quite remarkable for me to recall my early days as a racing fan. I held always the Union Jack high to show my support as I sat in the grandstands on red plastic flip up / pull down seat that were notoriously uncomfortable; however, that was what I could afford. Luxury was not my priority, the point was to be at the races, even if it meant standing up for these 66laps. Often I would end up on the grass verge with a blanket and a picnic basket sipping a cold drink if weather permitted. In those days the cheap champagne we drank was most likely “Pink Lady”, a brand name which was an overly sweet popular sparking wine in fashion at that time.

In those days the fans were the heroes. When the kings and princes would arrive, it was like going to the horse races. Jackie Stewart was easily recognized on the beat in his tartan trousers. The feel of the Formula 1 was so much different then, a real grand affair; however, these days not much of that is happening, rather it is an event geared more for sponsors and big wallets with the fan factor decreased. The cost has become an obstacle for regular fans, and even steep for those who are more in a position to afford the high prices. With the excellent television coverage we have now it is nearly a better choice to stay at home on a Sunday afternoon with a cold beer, popcorn and the comfort of your couch or favorite chair getting the best overview and commentary .

Today, the paddock club is the way to go with birds eye view of the garages, pit lane, and the chance to walk alongside the open garage of each team preparing, testing, and refining their race car in full view. Today Club Supercar Director Zara Christensen has the pleasure to be up close .
Just meters away she watched and admire the mechanics at work, perhaps not the ideal situation for them as the race car is full of secrets with every car a cash cow, therefore no photographs allowed inside the garage. Though she did a pretty good job of grabbing Rosberg before his crash for a selfie, these untouchable racing drivers are really quite humble and equally human like you and me. 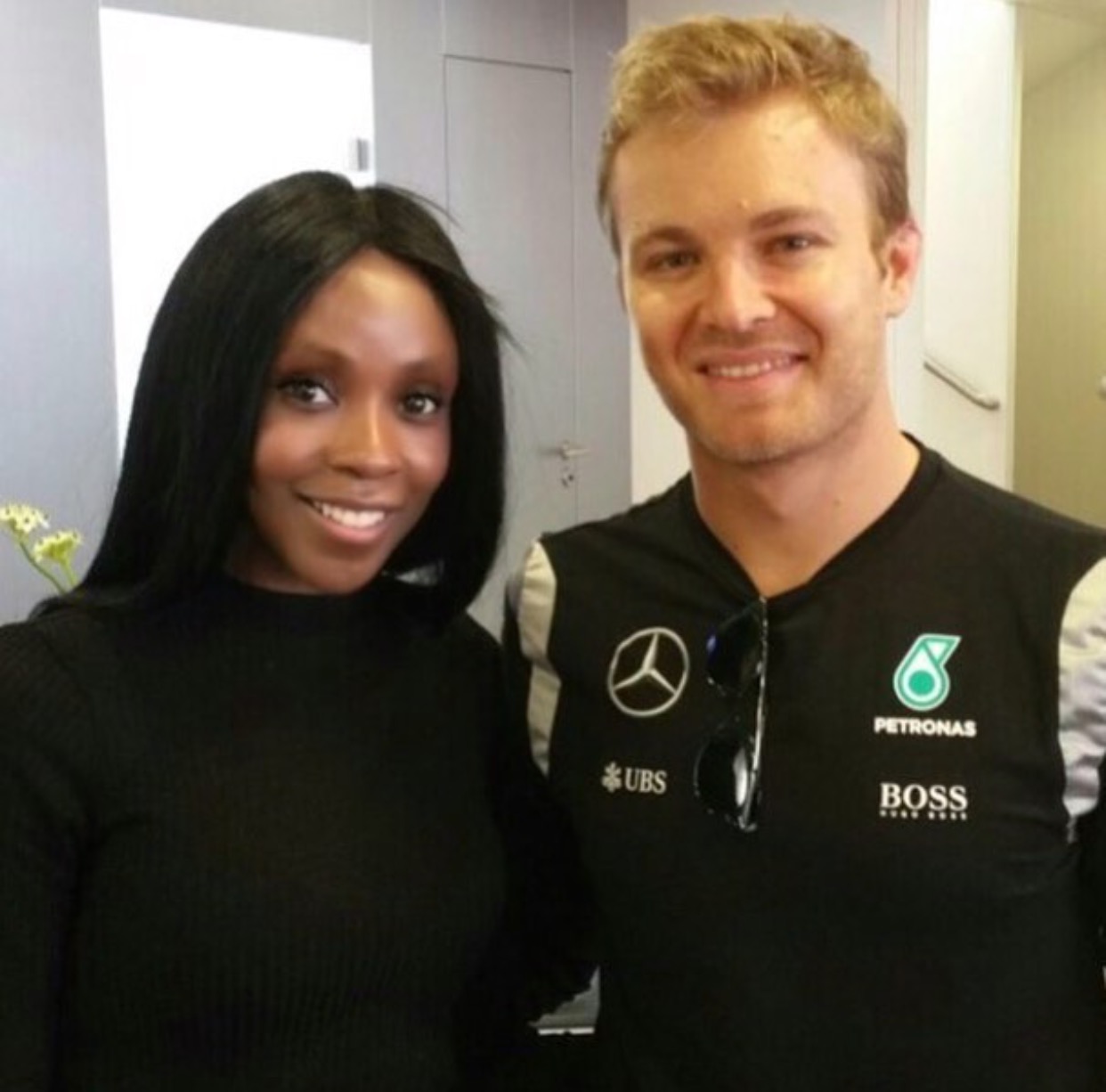 Change is inevitable, and for a long standing passionate racing fan like me, I realize the up and downside of time marching forward. I am fortunate to be able to attend F1 races, privileged to meet the racing drivers , walk within the garages and pit lane while being entertained in the Paddock Club with white collar service staff serving freshly created canapés and serving my favorite aperitif champagne.
Yes, I do appreciate the races even more having experienced the tracks in the old days before I was invited to the VIP section.

The Spanish Grandprix 2016 at the Catalunya Track in Barcelona may be decades removed from those uncomfortable plastic seats and glasses of Pink Lady; however, I am still the excited racing fan full of passion. 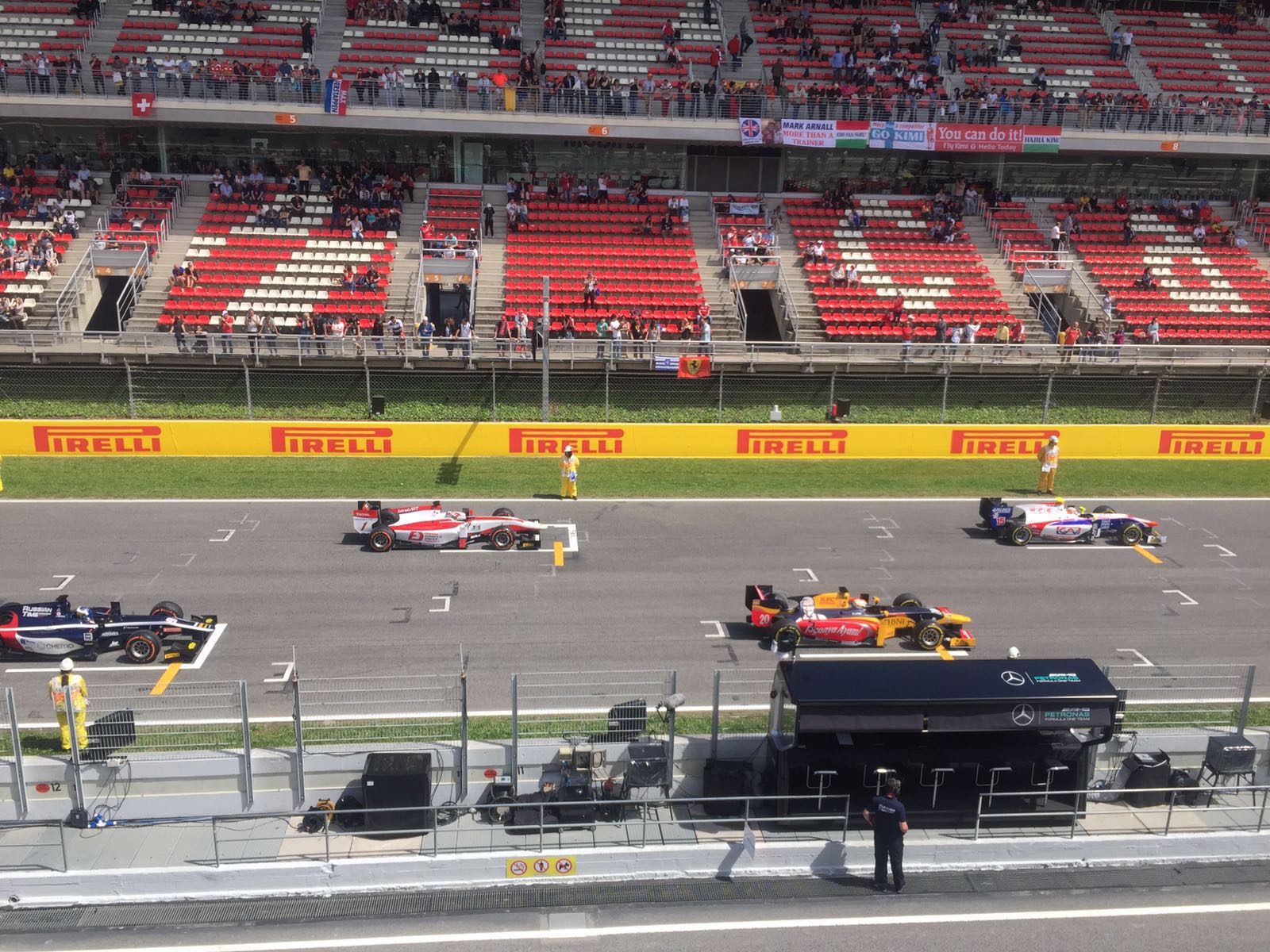 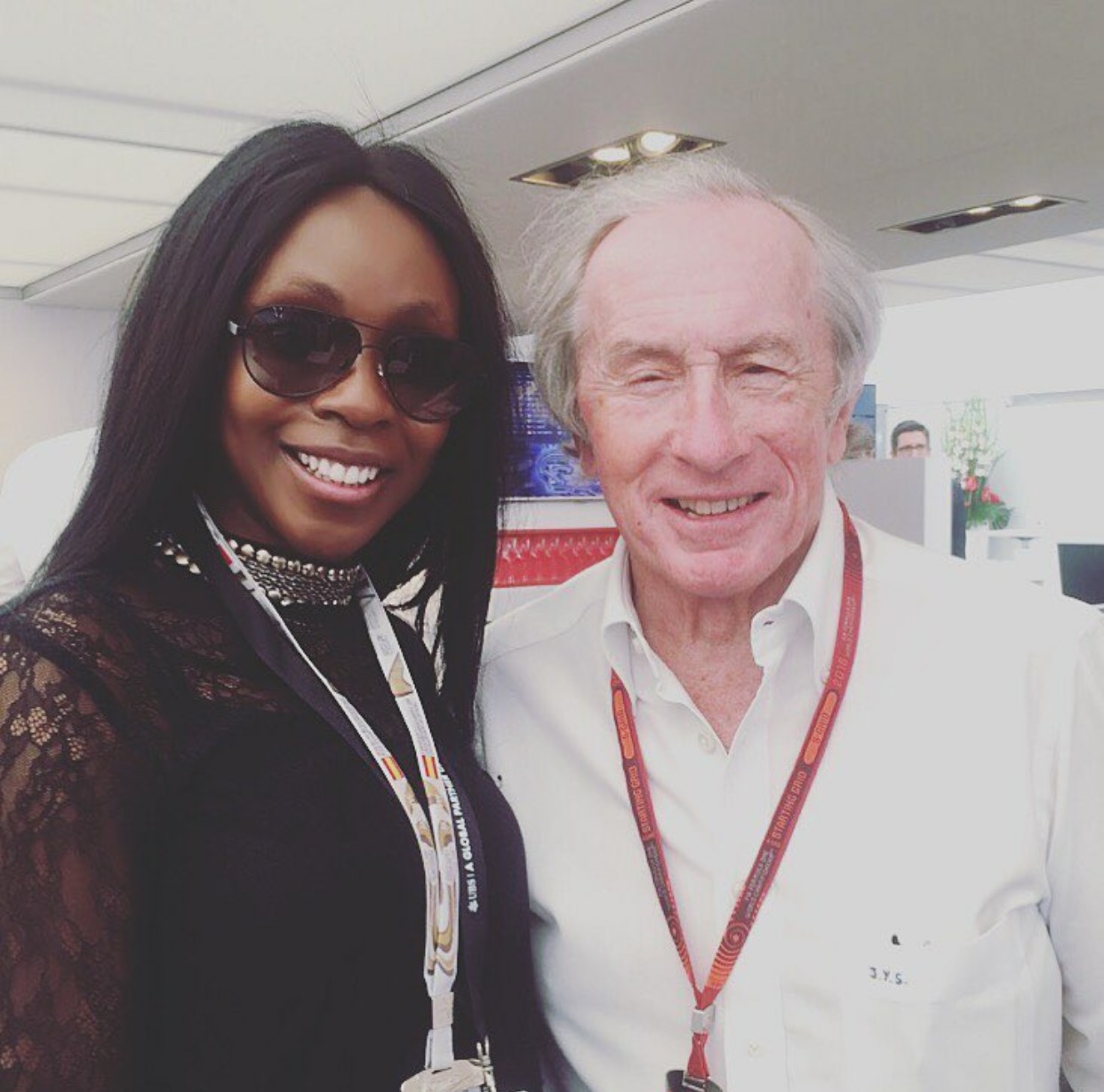 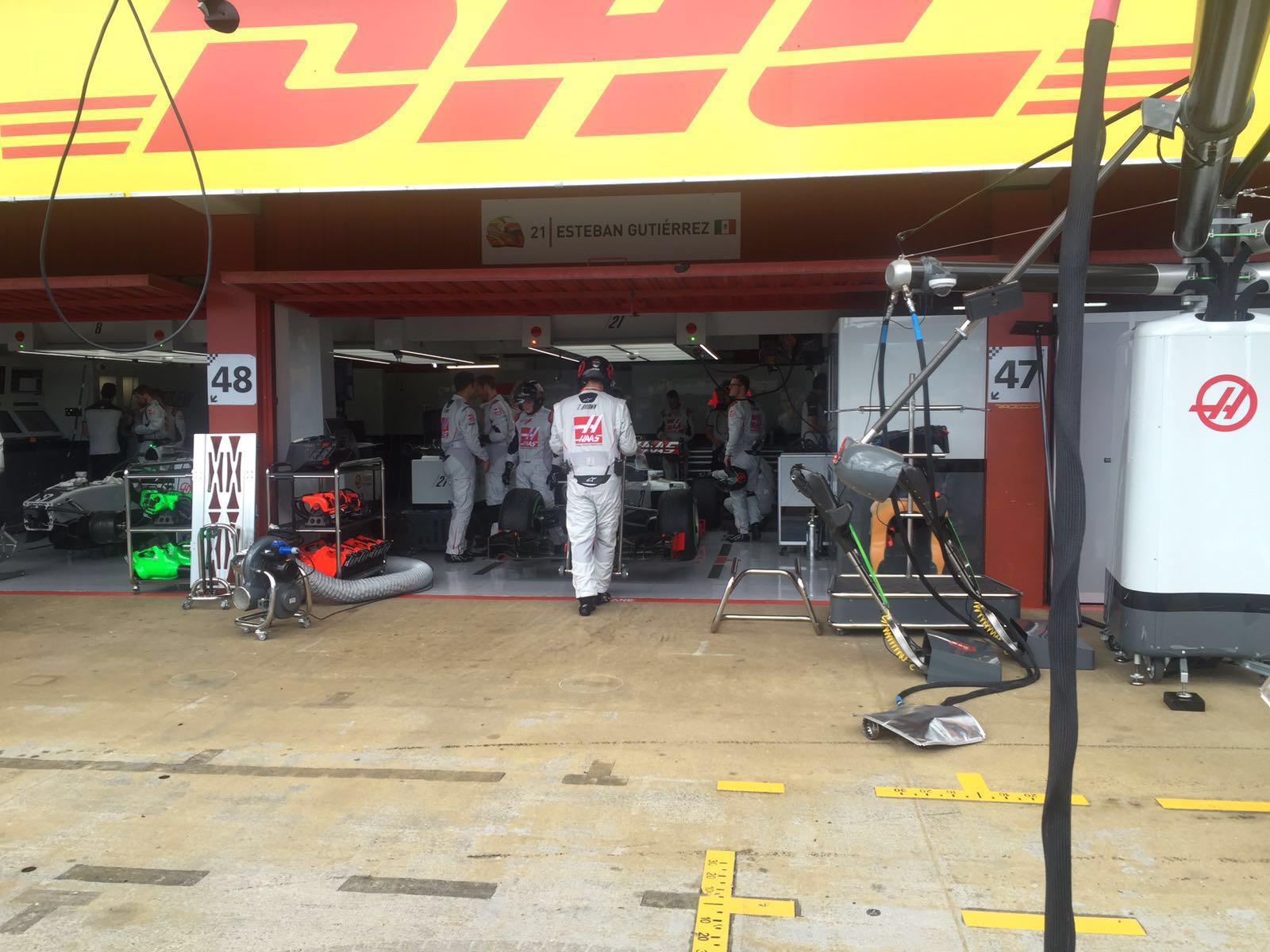 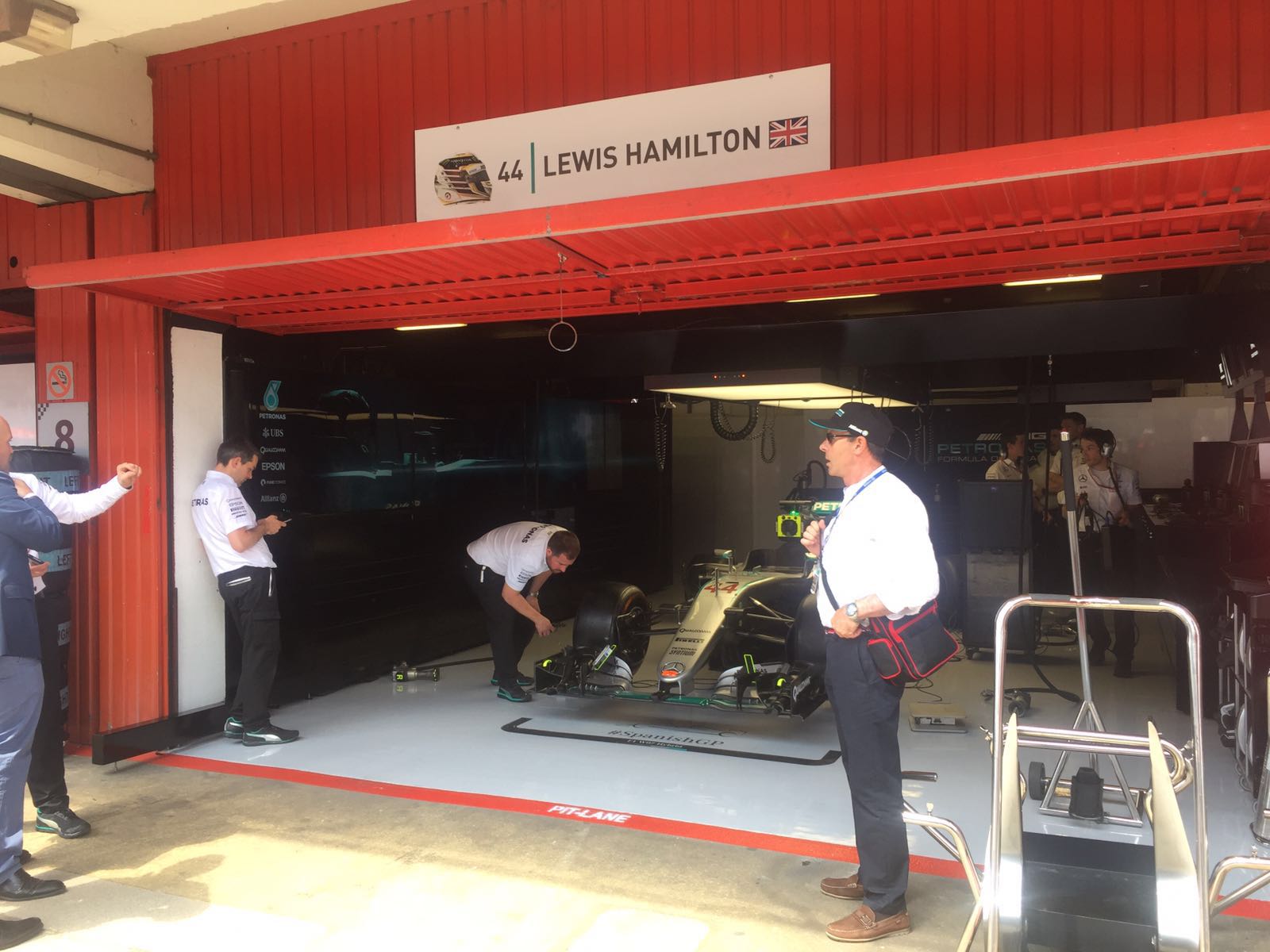 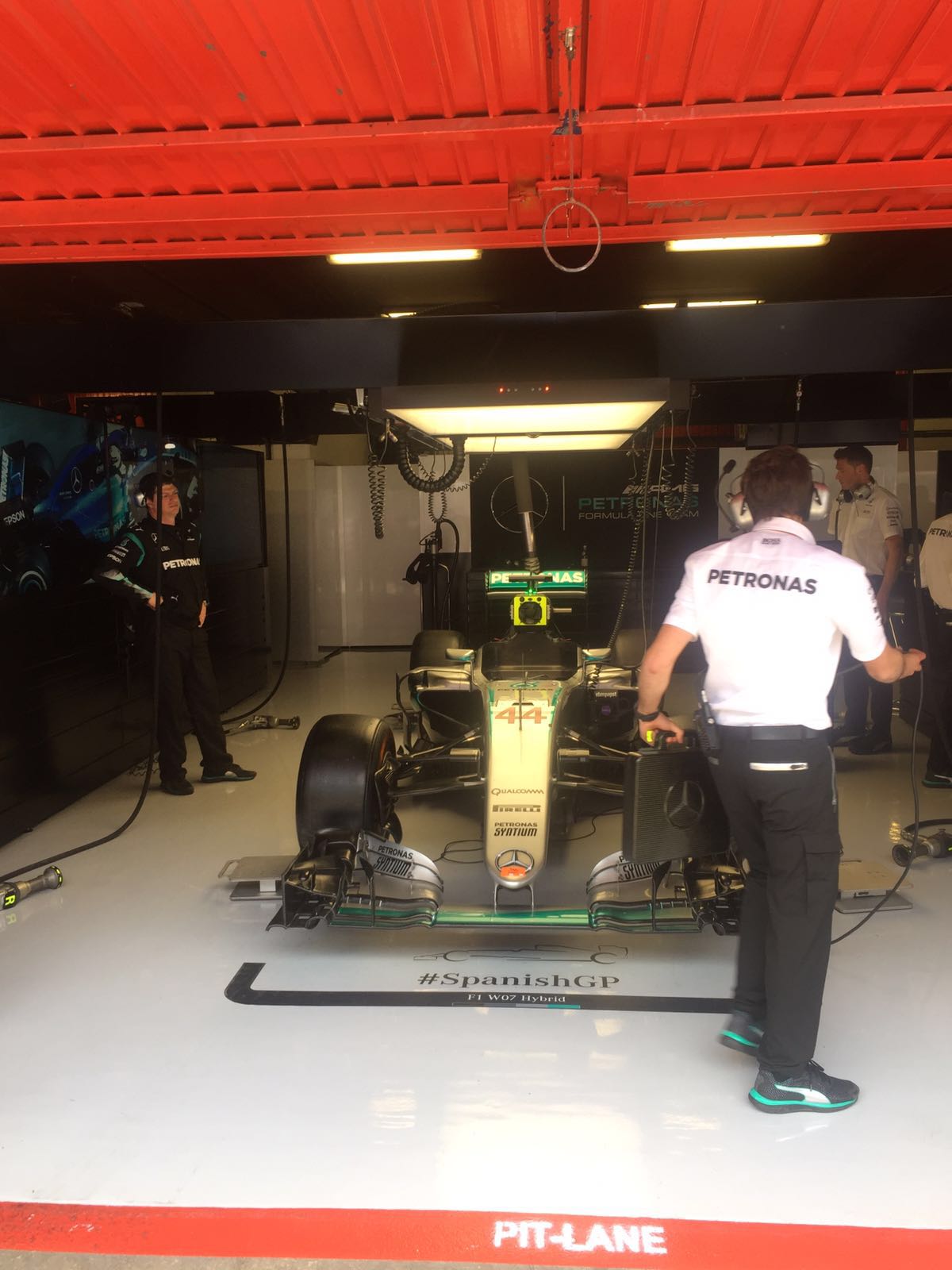 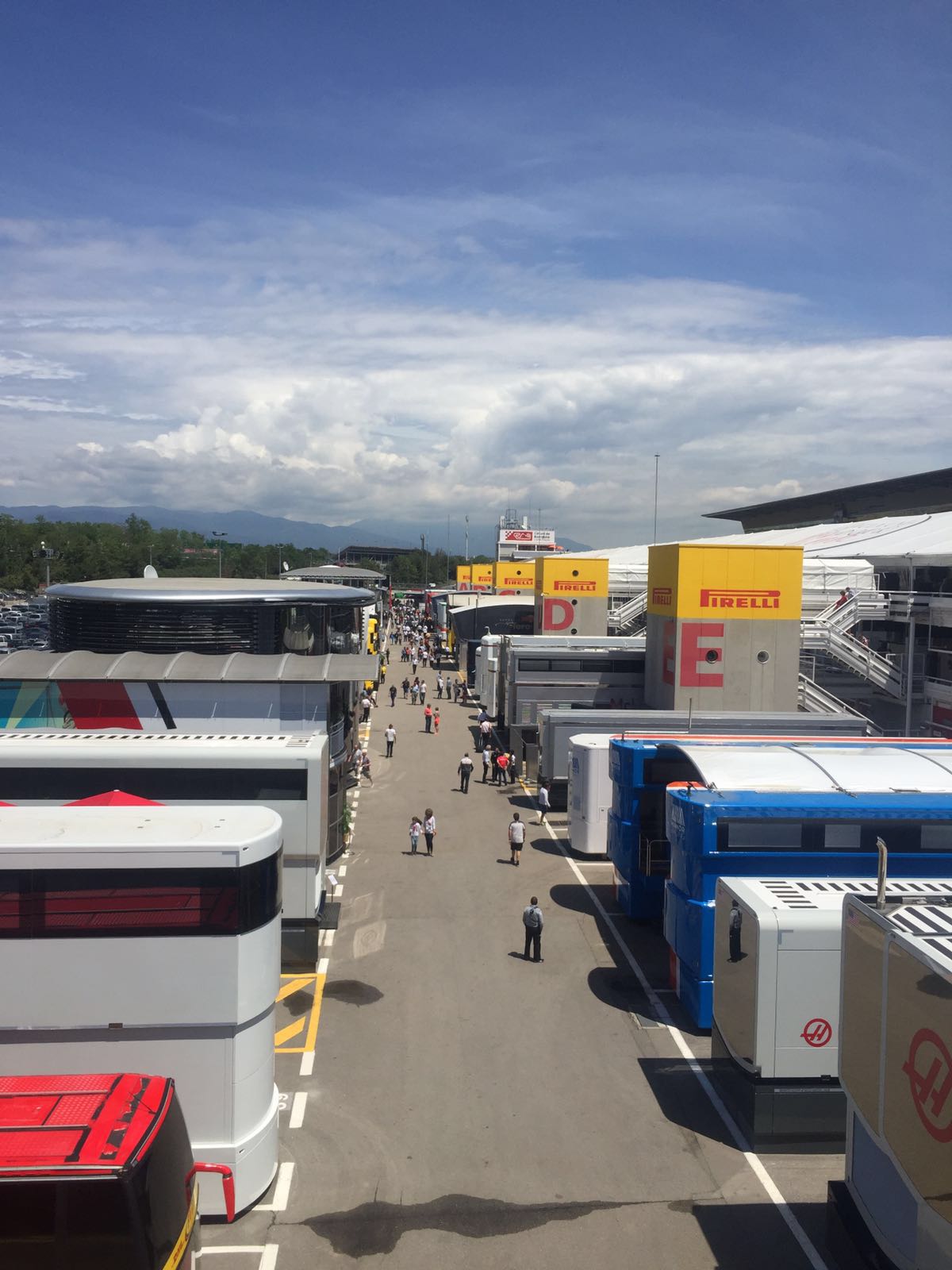 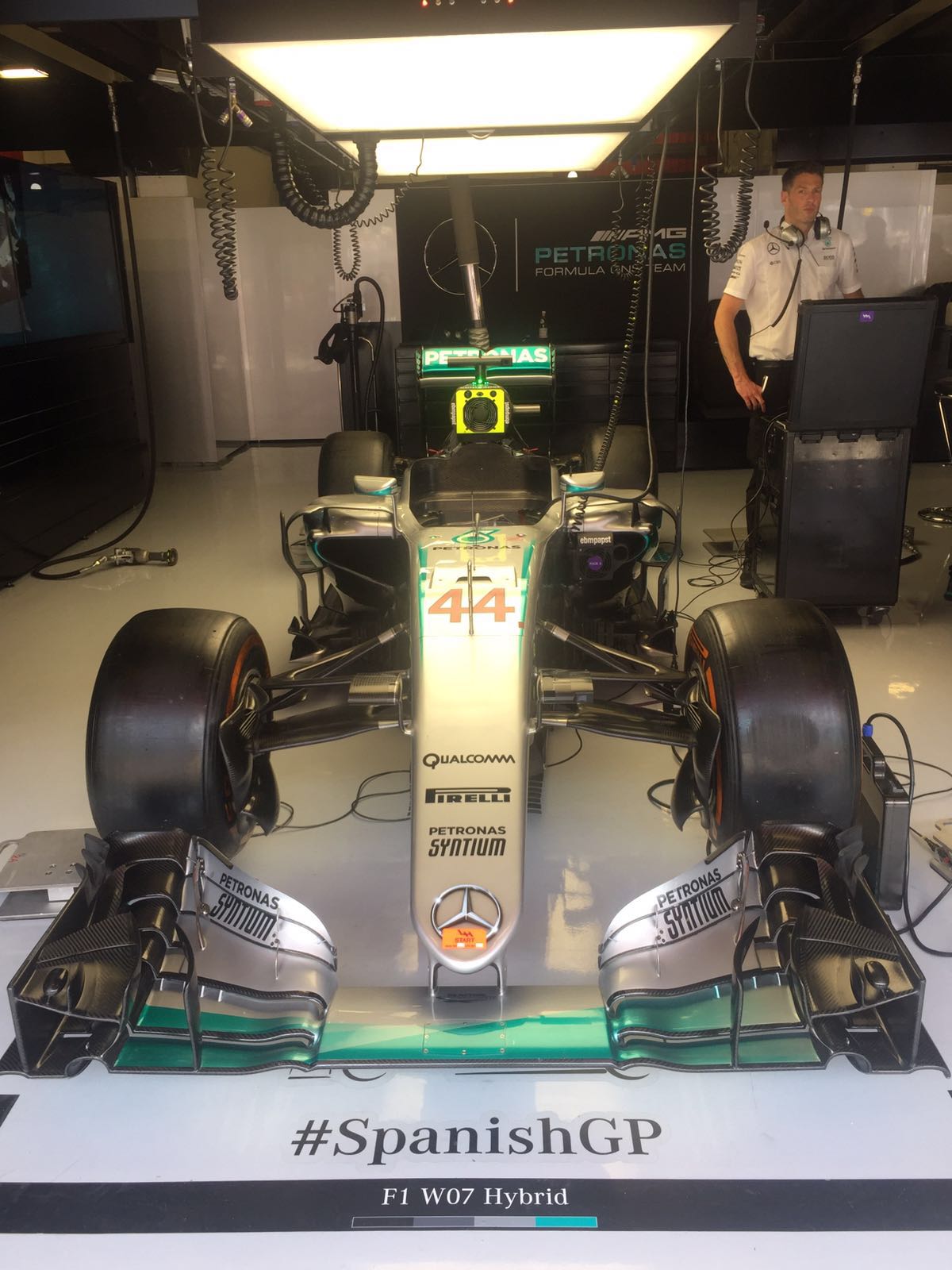 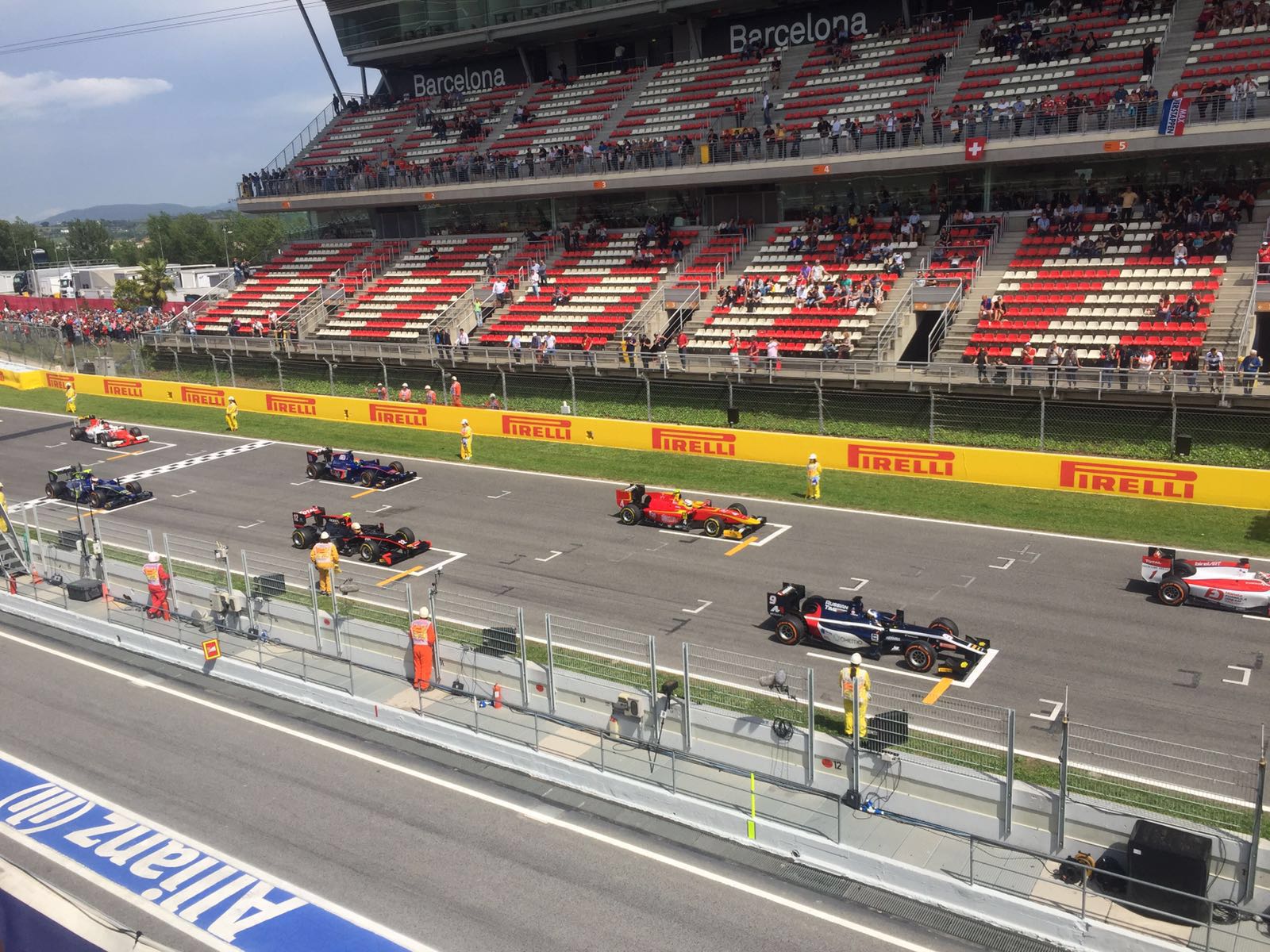