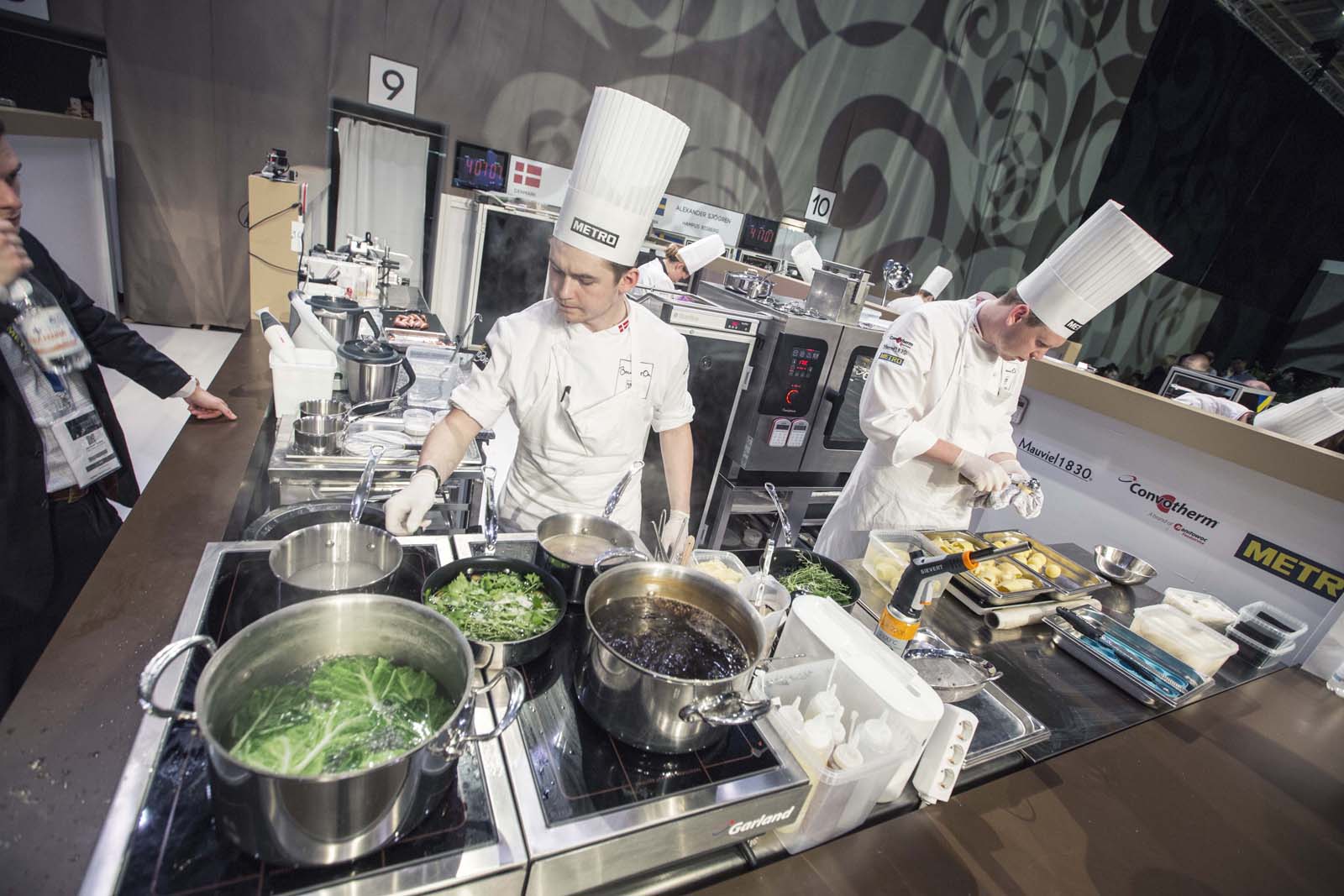 This is art.
A painstaking championship of articulated art using laser sharp knives, a concoction of heating devices and a preselected range of the best raw foods served on plates within a set time period for judges to rate. It is billed as, “Twenty chefs from all parts of Europe will put their skills against one another. The Bocuse d’Or Europe will bring together the crème de la crème among chefs from 20 countries”. Quite the competition!

I arrived yesterday in Budapest, a city of Thermal water and place where food, wine and culture is taken very seriously. Nearly two years ago our family decided to participate by contributing financially to a silver styled, glass mirror serving plate for Team Denmark’s 2014 competition, this same glass mirrored serving tray is also used in this years competition and this day May 11th 2016 will determine who is the best chef in Europe by country. My husband especially often participated in these types of events, and through a sponsorship many years ago we first met our own chef, Rasmus Koefod.
We understand what a little contribution can do when it is part of a larger well known event. It can go a long long way in helping someone achieve their goals.

As most of you foodies out there know that Rasmus, other then being the first chef ever in Denmark to achieve 3 Mitchlin stars we are the proud owners of Restaurant “Geranium” in Copenhagen and we are so so proud of him on his behalf. Rasmus is also a past champion, 3 times winner of this ultimate championship. As for aspiring chefs in this Bocuse D ‘Or competition he trained earlier this year Team Hungary. This is another reason this competition is important, to learn from each other and be on point plus it is a sneak peek to learn who the new upcoming chefs are and who are the contenders for the World Championships in LYON next year.

Those of you that followed the contest yesterday saw Team Denmark arrive in the top 10 which means they still have a chance to be winners so will also participate in World competition in LYON 2017.

Now, allow me to explain just a little about Paul Bocuse contest, without detouring too much off my subject. It is important to know this prestigious world championship is a nearly 30 year old contest created by Paul Bocuse in 1987, and in doing so he has contributed to the now widely held belief that cooking is an art, timing, calculation, precision and is far more than following a recipe by combining ingredients.

This competition began at a simple industry Trade fair in Lyon where Paul Bocuse, appointed Honorary President of the exhibition, conceived the idea of a culinary competition to take place during the exhibition with preparation of all dishes taking place live in front of an audience.

Now it has elevated to a whole new level. Having observed the competition, I now understand why men are generally (when they get it together) seem to be much better chefs than women and in this sport. It is not about the battle of the strongest or who can run faster, rather it is about how men think differently than women when working with ingredients. I cannot compare another sport where woman should naturally be the champions, which might be assumed because traditionally it is woman that work in the home, and cooking is a large part of the job in raising a family. In the past men fought wars, cut wood, and built castles outside of the home. So for men, cooking is all part of that course, not as a stay at home dad, perfecting his skill for his family alone, thus I do believe men are more dedicated chefs with an added value of men having a different thought process while cooking, nevertheless I would like to see more women in this competition and I wonder why it is such a male dominated contest.
Yesterday there was just 1 female, I saw and she was an assistant to one of the teams.

Okay, so much for a little digression and now back to Budapest and Bocuse D’Or European Championship. I am here with my girlfriend Ildiko, a foodie, blogger, lover of life & happiness with a powerful energy who is the perfect person to show me around since she is also Hungarian.

Ildiko walked me through the city, pointing out the most important buildings of Hungary’s history and their significance. There is a feeling of an old and opulent of wealth here compared to other Eastern European countries I have visited (they are all significant however!). The city is filled with visitors for the competition and restaurants are geared up and happily promoting Bocuse d Or. Even in the indoor food market amongst the stalls of deliciously farmed produce is a large TV /white screen reporting “live” from the competition so locals and those that cannot attend are able to watch the competition. This contributed to the overall excitement throughout the city and not only in the great halls of the Sirha Trade Center.

Of course after leaving the food market place it is time for lunch and how simple can it get when the choice given was Hungarian Goulash. I said no thanks as I am on a family competition created by my dearest husband Lars too loose 6 kilos in 12 weeks. Of course, his inspiration to encourage the women in the family, of which we are the majority, to look our best to ensure he had a good looking wife and daughters for the summer, so he added in an incentive that there would be some gain for whoever was the winner of the challenge. As many know, I like a good challenge so skipped goulash and landed at a Japanese Resturant Tokio right next to the Four Seasons hotel where I am staying. Lunch was a delicious salad of diakon and a miso soup with vegetables and shrimp. Life can be so contradictory by arriving at this prestigious contest on a diet.

After lunch we headed straight to SIRHA Budapest Tradefair center where we were just in time to see the Team United Kingdom, who arrive with a selected chef team plus a band. It is much like a football match where fans travel to support their team and that is exactly what the British fans did with bands and trumpets, kind of unbelievable but this is a an age of fans for many kinds of competitions! 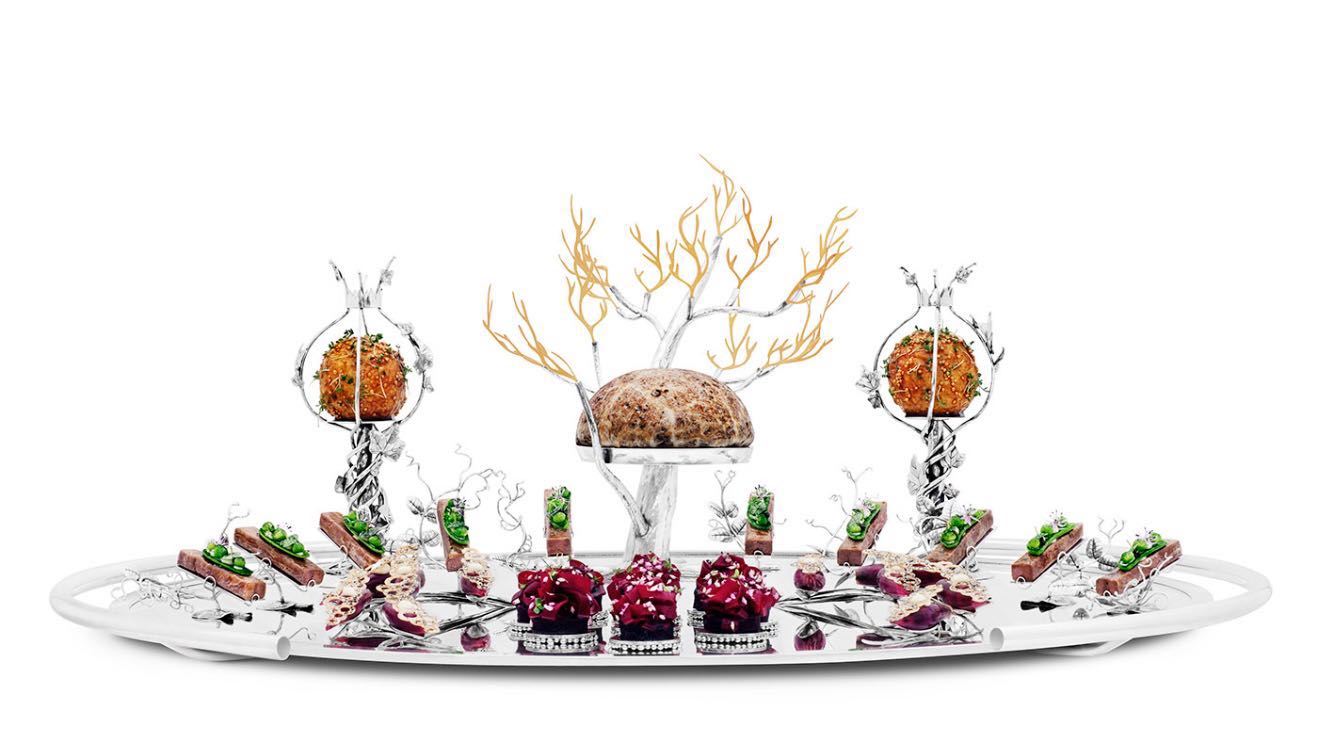 While in this great exhibition I was kindly invited by Head of Bocuse d Or Mads Marshall to Team Denmark’s reception sponsored by “Mauviel” where we were introduced to the team – Morten Falk Head Chef with his sous chef Emil and coach Jeppe a former Bocuse d Or winner.
The second day was part 2 of the contest where the next 10 Teams were up for the challenge, it’s a tough day for them all but luckily there are many winners on different catogories such as; Best meat plate or best fish plate etc. but this year we need to take our hats off to congratulate Team Hungary and a big warm hug to my Hungarian girlfriend Ildiko.